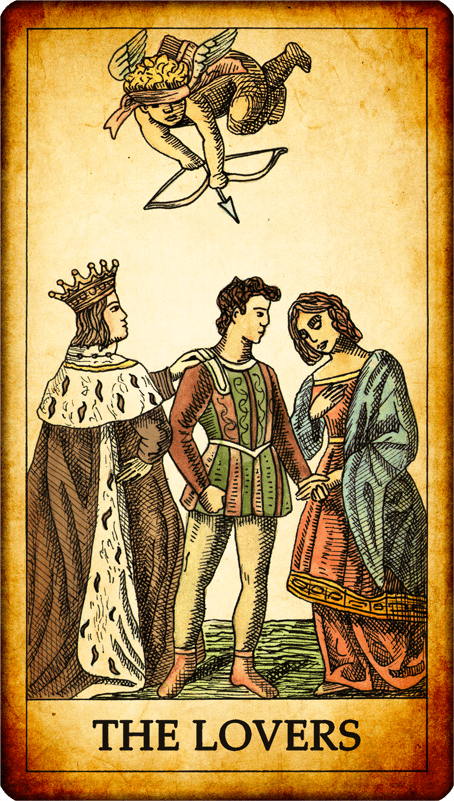 THE LOVERS represents transition from the tree of the knowledge of good and evil to the tree of life.

Note that the tree is 45. When placed in front of a mirror, 45 is equal to 54 (love). In the tree of life Love is Christ holding all religions, cultures and things together.

Since the card is trump, trump is the symbol of religious freedom and religious harmony. In the Major Arcana, trump is the love in the middle of the qibla compass. Hinduism, Islam, Christianity, Judaism, etc., are all united around trump.

Adam and Eve were initially a single entity before Eve was created. Two different religions correspond to a male and female about to enter into a serious relationship or about to get married. Separated, the two religions are Adam and Eve in the Garden of Eden.

As two different religions, Adam is a tree and Eve is a tree, such that the two religions are two trees in the Garden of Eden. Since they are separate, people will have to make a choice between Adam or Eve. Choosing one and rejecting the other is making a choice between good and evil.

Adam and Eve in the Garden of Eden are featured in the Rider Waite Tarot deck to portray the tree of knowledge of good and evil. The couple receiving a blessing in the traditional depiction constitute the tree of life.

Under the tree of life, the male and female are lovers having a very strong affection for each other. They are people of two opposite sex with a very strong force of attraction pulling them together.

The tree of knowledge of good and evil is chaos, which means that the male and female suffered or hard personal trials while they were separate.

God did not create two separate people in the beginning. He created one person representing one humanity.

The world is the garden of Eden and the trump is the polarity in the garden. Restoring mankind from chaos to harmony is transitioning from trump to Christ. It is converting the twenty two trump cards to Christ.

The trials or temptations under the tree of knowledge of good and evil are overcomed when trump is substituted by Christ in the Major Arcana. This means that the couple will experience a good fortune and a higher standard of living than when they were singles. They will ascend from earth to paradise.
James Agbogun
Certified World Bank Institute Social Innovator and Evoke alternate reality game awards winner.