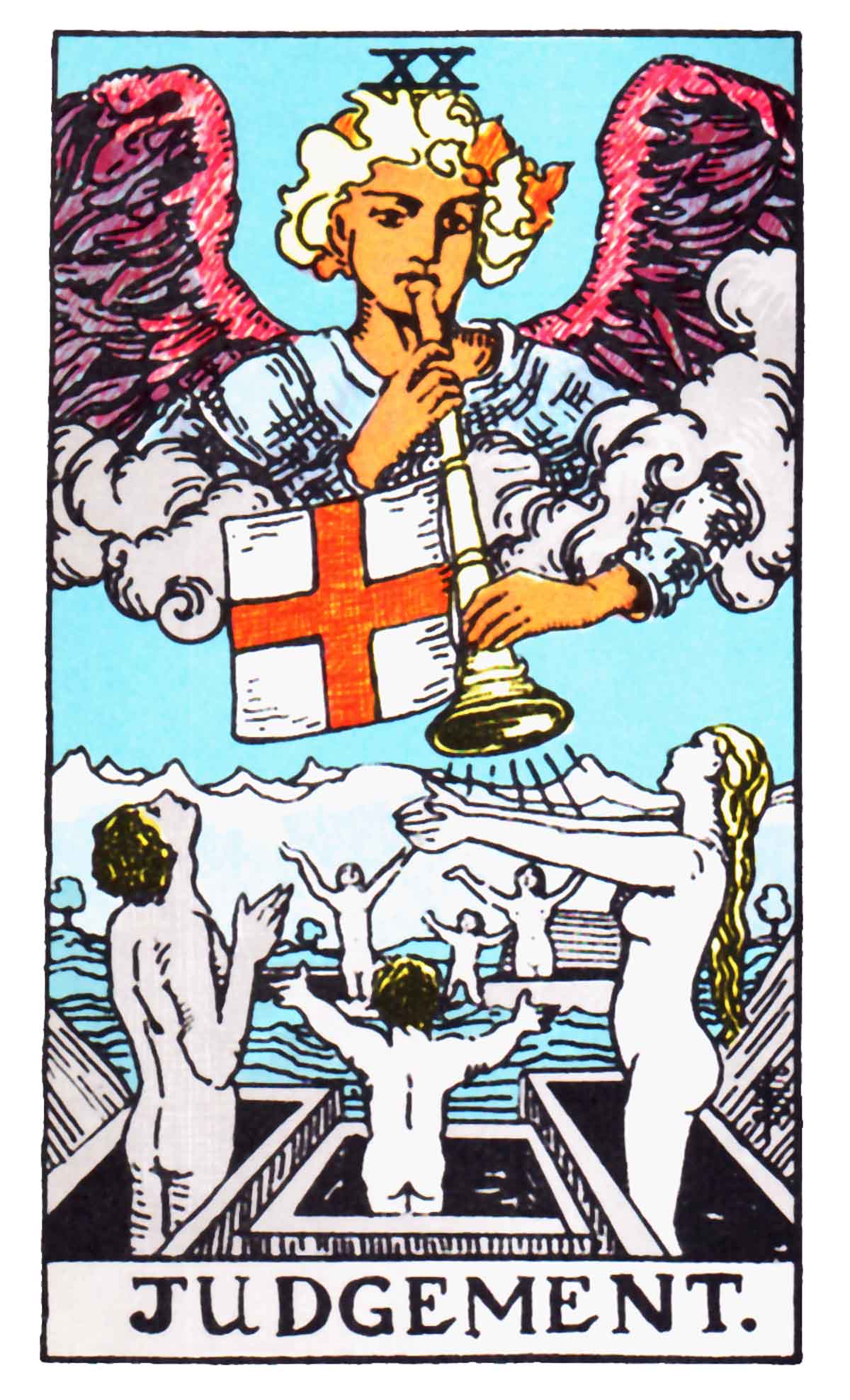 In a moment, in the twinkling of an eye, at the last trump: for the trumpet shall sound, and the dead shall be raised incorruptible, and we shall be changed. (1 Corinthians 15:52) "KJV"


Since judgement is the sound of the trumpet, each trump card is judgement, and the last trump card (the 22nd trump card) is the last judgement.


Judgement is depicted by Angel Metatron blowing a trumpet bearing a white square flag with a red cross dividing the square into four small squares. Apart from the angel, there are naked humans emerging from graves and looking up at the angel in awe.

In the Major Arcana, judgement is the resurrection from the dead. The dead featured in the card are called the sleeping dead.

To become unconscious means to sleep or to forget. In sleep, everyone goes about his business and no one cares about the fate of humanity. As no one cared about humanity so no one knew God.


The people rising from the dead were biologically alive. They eat, drink, talk, work, walk and reproduce, and fulfill all the characteristics of living things.

Judgement is musica universalis coming from Megatron's Cube. Metatron is the name of the angelic form of Enoch. Metatron's cube is the holy of holies.

Enoch was the Son of Man chosen to construct the holy of holies.


"God took him" means Enoch was isolated. "He was not" means that Enoch was like he was not. He couldn't work, marry, have children, own properties, etc. Everyone forgot about him, such that he was as good as dead.

Who shall declare his generation? For he was cut off out of the land of the living. (Isaiah 53:8) "KJV"


The flag attached to the trumpet is a Ludo game. The red cross dividing the white flag into four small squares is the Indian game pachisi. In the book of Revelation, the white flag and the cross are called foursquare.

The foursquare is a two-dimensional representation of the holy city, which means that the flag attached to the trumpet is the holy Jerusalem.

Each of the four squares has four sides. A side is equal to a token, such that the four small squares are the sixteen tokens in Ludo game. In other words, the Major Arcana is a Ludo game whose variant is the flag attached to the trumpet.

Rubik's Cube is Mount Zion (54), and the flag attached to angel Metatron's trumpet is the flag raised on the holy mountain.

Angel Metatron's trumpet and the flag are the signals of the end of the world, the resurrection, and the beginning of the new world.

Wondering where to look for signs of the end of the world?

Listen, everyone who lives on earth! Look for a signal flag to be raised on the mountaintops! Listen for the blowing of the bugle! (Isaiah 18:3) "GNT"


Metatron is Archangel Michael, Grand Commander of the army of the LORD, commanding God's people to rise up from their slumber and seize control of the world.

There will be the shout of command, the archangel's voice, the sound of God's trumpet, and the Lord himself will come down from heaven. Those who have died believing in Christ will rise to life first (1 Thessalonians 4:16) "GNT"