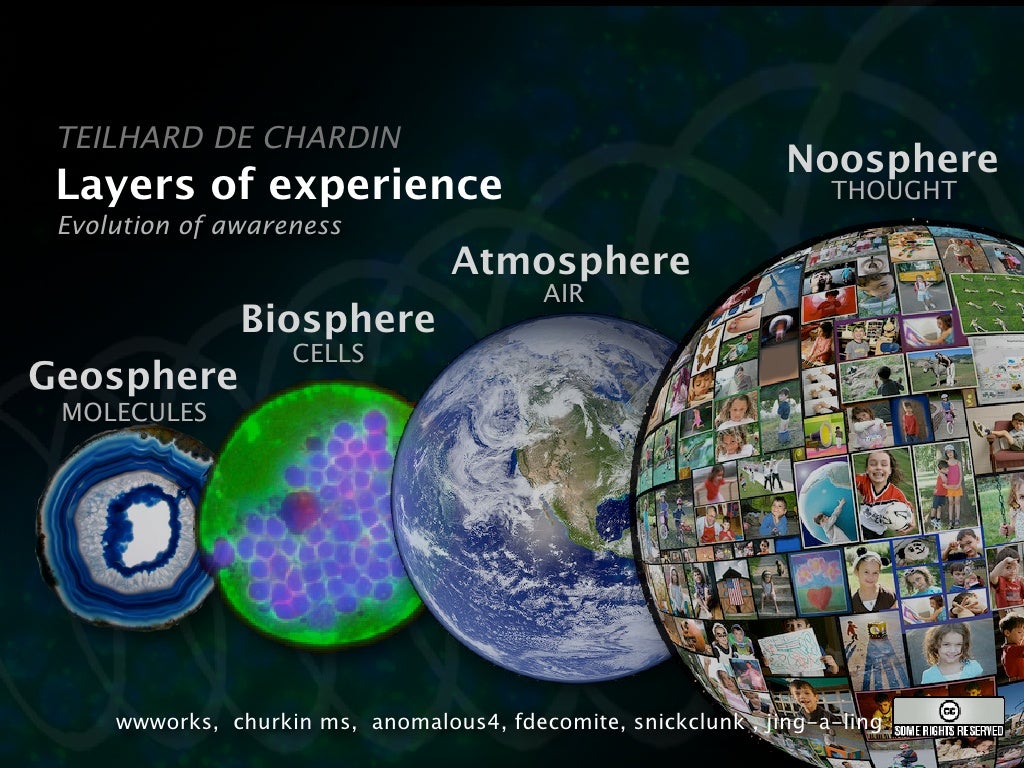 French Jesuit priest Pierre Teilhard de Chardin postulated that there is a noosphere, a natural cognitive layer of existence, above the atmosphere.

Noosphere is defined as the sphere of human thought. Teilhard called it the thinking layer of the biosphere. And the biogeochemist Vladimir Ivanovich Vernadsky defined the noosphere as the planetary sphere of reason.

Noo is derived from the Greek word νόος which could mean "spinning the thread of the mind" or simply "reason". Wisdom, intelligence, intellect, insight, intuition and thought are are all parts of the meaning of the word noo.

The noosphere is the peak of rationality attainable by humans and the peak of evolutionary development. While humans walk the surface of the earth, there is another layer of existence above. The only means of attaining this layer of existence is reasoning. Humans are able to ascend from the surface of the earth to a layer above the atmosphere by being rational.

Cognition is about acquiring knowledge and understanding. And coherence is about logic, consistency and uniformity.

Teilhard said the noosphere can be attained through the process of planetization.

Planetization is the total reflection of the earth upon itself as a result of human consciousness reaching the summit of its evolution and complexity. The two intersecting hexagram in the tree of life are the earth in a state of planetization. They are a cube reflecting upon itself. We understand from our knowledge of Platonic Solids that the cube (a hexahedron) is the Earth.

A cube has eight vertices. The number of vertices are equal to sixteen when the cube is placed in front of a mirror. The sixteen vertices are the sixteen principal Odu. This means that the noosphere is newunivars.com. Building this website is constructing the noosphere.

The term noogenesis is the emergence or evolution of intelligence.

Noosphere has a social phenomenon connecting all subjects into a network encapsulating the Earth. Computer science, mathematic, religion, philosophy and logic are some examples of the components of the noosphere. Through the subjects people of different specialities are interconnecting to form the internet called noosphere.

The people constituting the noosphere are not connected physically. Rather, they are independent people in different parts of the world interacting through their minds. We are aware that with the aid of social networking sites two people in different parts of the world can interact with each other through their minds. Through social networking sites, you can practically interact with many people without altering a word while alone in your room. This was why Teilhard said the noosphere leads to greater personalisation and individuation.

The noosphere is constructed online because it is about absolute freedom and liberty. You are in the same place with many people from all parts of the world, but you are alone because salvation is personal and whether you will make it to heaven or not depends on you.

There is no organisation, no address, no office, no rules, no place of worship or physical place of gathering. There is only the website which you can access freely. You are in a network in which the only thing connecting you with the other members of the network is the content of the website..
James Agbogun
Certified World Bank Institute Social Innovator and Evoke alternate reality game awards winner.