Opon Ifa divination tray, used in African religions, Afro-American religions and Yoruba Ifa, is a probabilistic computing system in which the Opon Ifa tray is a Ludo board and the Ikin seed and the Opele divination chain are the dice.

Opon Ifa divination tray is a binary numerical system comprised of t𝐄²he two binary digits: 0 and 1, which are two faces. The two faces are two persons competing in a Ludo game. The two persons are equal to the sixteen cowries called merindillogun or dilogun.

Each person is a thumb and the two players competing in the Ludo game are two thumbs. In chaos (multiverse), one person wins and the other loses. In harmony (universe), the two persons win.

Harmony is the balancing effect of the cosmos conferring victory on the two competing sides. There are no losers when we join hands together.

A tesseract is made up of two cubes; each cube is a die, and the two cubes are two dice. A die is a face, such that the two dice are two faces representing the two players.

In a tesseract, a cube is in a cube like a seed is in a fruit. Just as a fruit and its seed are one, so there is a single tesseract.

A finger is a line, the four fingers in each hand are equal to a square (4 lines), and the eight fingers are equal to two squares. The eight sides of the two squares are the eight half shells constituting the Opele divination chain.

Half a shell is equal to a cowrie, and the eight half shells are equal to eight cowries.

One person is equal to two squares, since every human being has eight fingers equal to eight digits or eight lines.

The two persons competing in the Ludo game are equal to four squares. On the Ludo board, each person has two squares. 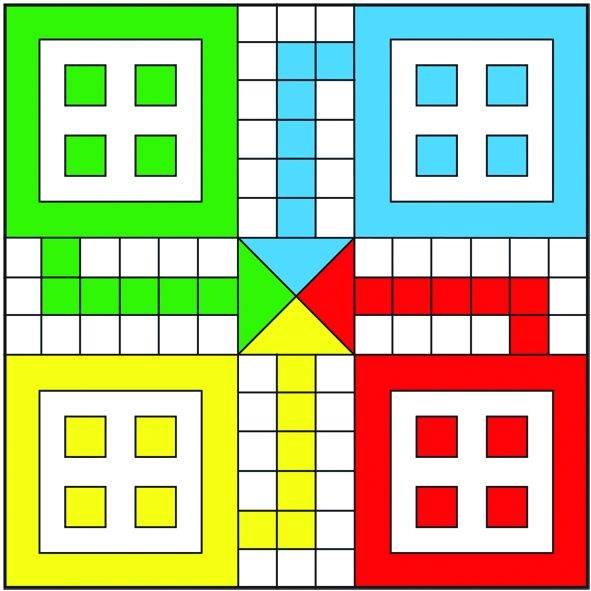 The perfect square is a Foursquare comprised of four squares.

A square has four cowries and the four squares are four four groups, each equal to four Cowries.

The sixteen Cowries are the sixteen tokens of the Ludo game. A player has eight tokens and two squares.

Since the perfect square is the cosmos, the Opon Ifa divination tray is the cosmos. This means that the cosmos is a probabilistic computing system whose final outcome or result is deterministic.

The probability is either win or lose. And the final outcome is victory.

A computer operates on win (1) or lose (0), but in the end it gives the desired outcome. The information contained in the computer are stored in binary digits made up of the binary numbers 0 (lose) and 1 (win). But what we desire is not the game between win and lose taking place inside the computer but the final output: Win!